Pestilence series: Poems from the Back Room: Hugh McMillan's Blog

With thanks to Hugh McMillan for featuring me on his Blog.  You can read more of the Poets chosen for this series on https://pestilencepoems.blogspot.com/2020/07/poems-from-backroom


Poems from the Backroom 115: Stephanie Green 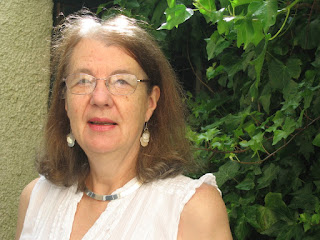 Hugh Bryden is a ghost now and then in these pages, illustrating a book here, facilitating a project there. He nearly appeared earlier on the series talking about his latest collaboration with Donald S Murray but the pamphlet was coronavirused at the printers at the time and he wanted to show us the finished product. As he is coming up to a very important birthday soon I hope someone is putting together a chapbook of appreciation given that he has worked with some of the best poets around and is an international class artist and print maker in his own right.

One of Hugh’s great ideas was the 'Burns Windows' project. As you probably know Burns used to carry a diamond tipped pen around (the accessory of choice for all ploughboy poets) with which he would inscribe folks' windows with comments in verse about his experiences in the locality, a kind of 18th century Trip Advisor. I don’t know how he got away with it given when I wrote a pejorative essay on the toilet wall of the Globe Inn about another poet I was threatened with arrest. Anyway Shug’s idea was to cover all the windows of the Globe, Burns fave pub, with acetates bearing words from poets all over the world. He did this marvellous project several times in Dumfries and once in Dunfries’ twin town in Germany, Gifhorn. It was a marvellous effect, a glistening sea of words.

I think 'Burns Windows' is where I would have first come across Stephanie Green’s poetry although she was also involved in several projects in Dumfries including, as she is an expert in dance, the Dumfries troupe Oceanallover who can always be relied to come to arts events dressed as prawns. She's also the first poet we've had in the #plague who is a trained puppeteer. But it is her poetry we are concerned about here, and it is glorious indeed.


Steph is another Irish/Welsh meld, a Welsh speaker with an Irish parent though she now lives in Scotland. Her first poetry pamphlet, 'Glass Works'  from Cat's Pyjamas Publications in 2005 was short-listed for the Callum McDonald Award and her latest pamphlet 'Flout' was published by HappenStance and launched at StAnza in 2015. She has read at many poetry festivals in this country and beyond.  Stephanie's poetry is often born from history and in her hands it is not only a thing of beauty but work that holds a mirror to our contemporary hearts and souls.

Here Stephanie is reading 'Hanmer's Agate', a poem about a tulip brought home from exile to a country torn by war, a symbol of peace and beauty born out of carnage, the kind of gift of/from nature we’re looking for to inspire and guide us out of all our current messes. Originally it was written as a counter to Brexit, a catastrophe still looming. It is transcribed below, along with the haunting 'I tell my husband I am pregnant and he sets out to make a tiny coffin (1891)', a poem inspired by the tetanus epidemic on St Kilda in the 19th century which is almost unbearable in its understated sadness.

Two Poems from 'And Other Poems':


Returned from exile, he stands in a muddy field,
once his garden of formal parterres;
the trees are war-torn, storm-slashed; fireweed
rages through the grounds and the unhinged door

into the great hall; mice rampage,
bird shit weeps on the lace and lovelock
of his portrait as a young man; dung in the chapel
requisitioned for Parliamentarian horses.

Far from the Commonwealth’s courts, Sir Thomas
tends his garden, remembering the promise packed
in papery brown bulbs brought back from France
in the ship’s hold, his first wife left behind in her grave.

He plants the knot-garden they’d planned together: auriculas,
ranunculas, anemone and above all, tulips:
Belle Isabelle, Belle Susanne and Agates.
They rot in the wet Flintshire soil.

Should he sprinkle wine on the earth with incantations
to the moon? No. But after much experiment,
he shares his success with a fellow tulip-fancier,
Cromwell’s second-in-command.

Plant them about the full moon in September,
in soil taken from mould from the fields or woodstacks
and mix with a 4th part or more of sand.

A gift of beauty, beyond faction: the mother-root
of the most exquisite and gallant, a tulip agotted
with scarlet, and gris de lin on pure white,
well parted, its base and stamens blue.


I choose a name: Mhairi or Callum.
He searches the tide-wrack daily for driftwood.

He forbids me to make clothes
But I make sheets for the coffin-crib.

for the few blessed days of its life.
It is God’s will. I shut out imaginings:

the fourth or fifth night,
when the babe gives up sucking;

the seventh, clenched gums,
even for my finger dipped in water.

I am knitting a shawl of such intricacy,
nothing so beautiful will have been seen before.

Posted by Stephanie Green at 21:38 No comments:

So delighted to have been accepted on the prestigious Seamus Heaney Centre Poetry Summer School.
A week long of poetry critique, discussions and readings - but this year, due to Covid -  all online.  A fantastic way to hear and 'meet' poets of such talent and different approaches.  A bit of craic too, even though through the internet.  Our tutors were all brilliant: Nick Laird, Leontia Flynn, Simon Sexton.

TheBlackbird  is the emblem of the centre, named after a beautiful early Irish poem, translated by Seamus Heaney and many others.  'The Yellow Nib' is the SH Centre's poetry magazine.

A shame not to have been able to go to Belfast itself but certainly in the future I'll go in the flesh next time.


Posted by Stephanie Green at 21:58 No comments:

Sonja has made a vimeo giving a taster of our StAnza experience plus extracts from our 'Meet the Artists' talk: Sonja Heyer (Sound Artist), Valerie Coffin Price (Artist) and myself (Poet).

Valerie's artwork is inspired by the poetry and sounds of  'Berlin Umbrella' but she also included her own experiences of walking along the river Spree and Landwehr canal and so her exhibition is entitled 'Berlin Water.'

Posted by Stephanie Green at 13:21 No comments: 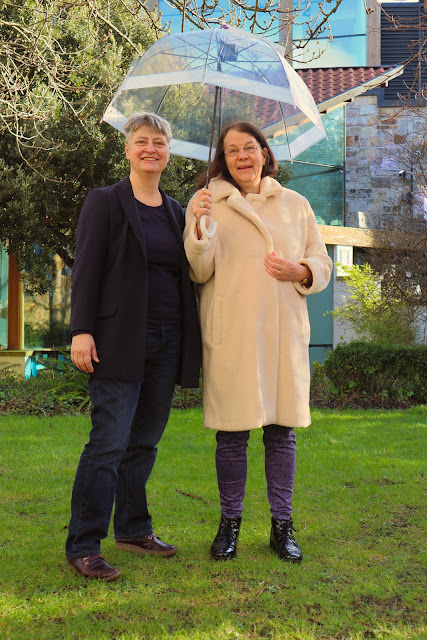 Sonja Heyer and I outside the Byre Theatre, centre of the Scottish Poetry Festival, at St Andrews.


Everyone came up and enthused saying how much they enjoyed the poetry/walk.  We had sun, but one windy day when a few umbrellas fell victim, turning inside out, one rainy day but that didn't matter as they are real umbrellas. 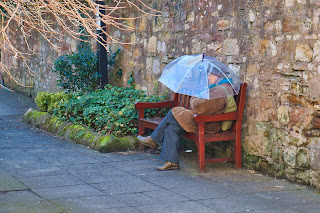 A punter listens to Berlin Umbrella in the Byre courtyard,
sheltered from the wind.


The Meet the Artists event led to a lot of hand waving -
in the background on the wall are Valerie Coffin Price's artwork
inspired by my poetry in Berlin Umbrella and accompanying
Sonja whilst she made natural water sound recordings. 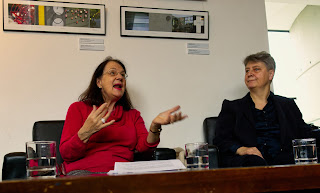 Stephanie holding forth on the process and development
of the poetry. 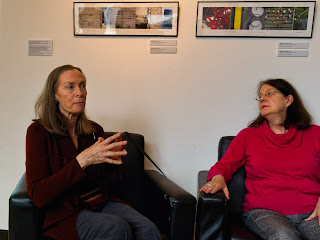 Valerie on the artwork. 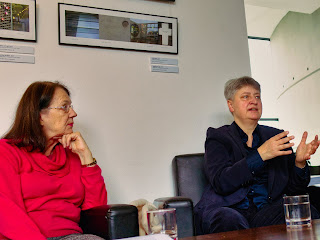 Sonja.
on the Sound Art.


Posted by Stephanie Green at 21:19 No comments: