I've never seen so much gilt on cupolas and on the top of spires shining in the sun or inside the palaces plus white stucco and chandeliers.  Each palace my husband and I (as part of a group tour) went to was  more stupendous and glittery than the last, outdoing Versailles.  Louise XIV must be turning in his grave.  Every building in the centre and either side of the river Neva appears to be a former palace. Even more amazing was to discover that many of these palaces were destroyed in WW2 and have been rebuilt as almost exact replicas.

Our guide was enthusiastic about Peter the Great and the 18th c and in particular Pushkin.  I found the Literary Cafe on Nevksy Prospect which is where Pushkin was before he left to go to his fatal duel. Unfortunately the cafe was closed (cleaning up after 'a banquet') but we did see his statue in a nearby square. The Russians are mad about Pushkin. I gather he is the country's favourite poet.

A poet who means much more to me is Anna Akhmatova. We had one day 'free' from the official guided tour and so I made a personal pilgrimage to one of her residences, now a museum, in the Fontanka building, part of the former servants' quarters of the Sheremetov Palace but turned into flats in Soviet times.  The small apartments housed several families, and I believe it was 8 people who had to share the basic kitchen.  The experience of visiting this poverty-stricken apartment was a sobering corrective to all the splendid palaces.

On return, I have been reading Elaine Feinstein's detailed and fascinating biography.  Akhmatova's first husband was shot by the Soviets and her son was sent to a gulag in Siberia. Her life  as well as the poetry is deeply moving and I've been rereading the poetry (in translation. My Russian is very basic.) 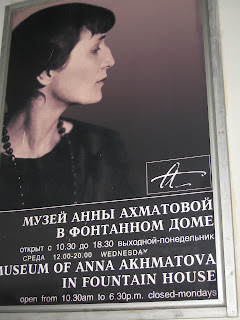 Posted by Stephanie Green at 17:10