Day 5: Surprise links from across the Atlantic, Poetry in the Persian Tent

It's extraordinary how distinctive each morning of these five poetry events has been and today proved to be no exception with a surprise American thread. Carole Clarke, with her accompanist, George Wilson, could have had no idea that their inclusion of a Bernstein song, and a poem, 'Little Rose' by Emily Dickinson put to music, would be the perfect echo to a  last minute addition to the line-up- the acclaimed  American poet, Marie Howe.  How Marie Howe came on board is a long story, involving trans-Atlantic links, the Aldeburgh Festival and John Glenday so many thanks to them for this wonderful surprise. 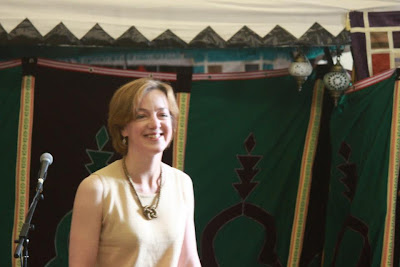 The event started and ended with Burns' songs from Carole, so the Scottish-American balance was maintained.  Our first Scottish poet was Eunice Buchanan from Arbroath who lives part of the year in Australia now, following her grand-children but is back in Scotland for the summer (what summer?) My favourite was a suitably rainy poem from the point of view of  Noah's Wife in her characteristic dry wit and in Scots, made it clear the wifie would have a deal to say to the All Mighty about those floods.

Next, a poet who lives in the far Top Left Hand corner of Scotland, Mandy Haggith  brought the salt-water and winds of Assynt into the room with dramatic poems personifying trees- reminiscent of Alice Oswald's poems about wild flowers.  These were a sample of the  18 poems about the trees of Scotland, each one also a letter of the Gaelic alphabet,  that Mandy will be publishing shortly with illustrations  so I'm looking forward to that.

Marie Howe's poems proved as stunning as I had been told.  Her poems are sensuous and wise, about love and loss in that everyday American speech that can be cool and seemingly casual, but hits you with its truth and simplicity.  It sounds so different from the more heavily laden iambic we do over here.  I was particularly taken by 'After the Movie' when she and a lover debate what they mean by the word 'love', quoting Simone Weil, Meister Eckhart and Janis Joplin.  That's a great example of her range - issues tackled by great philosophers and  theologians but in the context and voice of the contemporary world too.  I was smitten and will buy her latest book, 'The Kingdom of Ordinary Time' at the EIBF whilst it's still there. Because, of course, I have to admit it wasn't just our event she had flown over the pond for- but for her event with Lavinia Greenlaw the day before at the festival across the road from us in Charlotte Square.  Great that she could fit us into her tight schedule though.

Our last poet, Stewart Conn, needed no introduction to a Scottish audience, especially in Edinburgh, as he is the former Edinburgh Makar (poet laureate).  Also as former Head of Scotland's BBC Radio Drama, his poems proved to be little dramas too, and no surprise, he was a terrific performer too. The audience made it clear how well-loved he is.  I particularly enjoyed  'Early Morning' about two doves billing and cooing outside his bedroom window and the title poem of his latest collection 'The Breakfast Room' inspired by a painting by Bonnard of a woman (whether the painter's wife or maid is unclear) merging into the curtains.  Stewart's poem is in three parts: the p.o.v. of Stewart himself, Marthe, the painter's wife and the painter. As in the painting and poem, things or people on the periphery are often the most important just as in Stewart's poems, where he knows how to bring out the drama of  everyday occurences.

Sadly it was our last event. It all passed in a dream-like haze for me, partly due to paracetamol and flu but I think my euphoria was really due to the superb performers - both poets and musicians who created such a wonderful atmosphere, and the lovely responsive audiences.  But I have to thank the small army of  wonderful volunteers,  and FoSP backstage staff, and in particular the Sound and Technical support, Wezi, who kept calm at all times...considering the changes to the line-up which seemed to occur every day either due to cancellations due to unforseen problems, or planes unable to take off or land due to fog, or planes bringing us surprise newcomers.

Will I do it again next year?  I need time to think about that one.  A hot bath and early night or rather several early nights are needed.  Some very happy memories though. Thanks to everyone involved.
I'll post up on Oxfam's Just Giving site for Old MacDonald had a Farm for Africa project how much we made when it's all worked out.