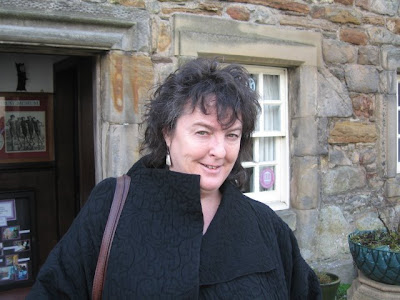 But did get this very characterful portrait of Carol Ann Duffy, taken outside the Trust Museum after the 'Round Table' intimate reading. I was very lucky to get a ticket - only 12 places. So like the Apostles we gathered round and had a chance to meet CA as a person, rather than a spotlit dot on a stage which is the usual experience of her readings that one gets. A different selection from the reading she had given on the Byre stage the night before too and some little personal introductions and asides.

Two bits of info were of particular interest to me - that 'Standing Female Nude' (in Mean Time)was the first poem CA wrote where she felt she was writing as herself. (Something which, as all poets know, is as hard as it is essential.) 'This should be read naked in a French accent but even though this is an intimate reading, it's not going to happen,' she said.

The other interesting aside was a game she told us she likes to play with an hour to spare and a glass of wine- thinking up Moon similies: mirrors, windows etc and how many poets write poems to the moon from Sappho to Alice Oswald.

I think this event was the highlight of the festival for me - though CA's reading along with Patience Agbabi on the main Byre stage was mesmerizing. CA read from The World's Wife, 'Mrs Midas' and one other from WW (I forget right now which) with her usual consumate skill of irony and use of dramatic pauses and then a selection of her love poems from Rapture. I have read this sequence many times, and admire the range of tone, and also extraordinary variety of poetic form (though all versions of sonnets) and yet some of the poems still hit one in the solar plexus with their emotional force. So hearing her read them was a moving experience. She punctuated the evening with excerpts from the poem about the girls' laughter sabotaging a school which was an inspired device. She also read 'Prayer' which was the third time I have heard her read it in one year - but I can never hear it too many times. As I've said in previous blog, one of my most favourite poems.
It does have to be heard for the music of its cadences.

Incidentally Patience Agbabi was an inspired pairing. I've heard PA read or 'perform' before at a festival in North Wales many years ago and that was a memorable experience in an old fashioned, draughty hotel in Criccieth. I have to confess that this second hearing was not so striking for me this time - the 'performance' poems - with their strong images and beat were still as successful as ever but her new foray into writing sonnets seemed rather thin.

PA exemplifed how a dramatic performance can lift a poem only so much and was a living example of issues raised in the Breakfast Discussion later on the Sunday, the event entitled 'Poetry Breakfast: Actors or Poets?' I've gone on many times in my blog about my own preference for hearing poets read loud and clear. I can't bear mumblers (which seems to me a false modesty and inconsiderate of your audience.) The multi-layered page poem, justifying several readings to tease everything out, may not be totally appreciated on stage but sometimes (as in the case of CA) it can hold its own as performance too.

Hearing the actor Crispin Bonham Carter read out a poem by Ros Brackenbury followed by Ros herself was interesting. BC brought out one interpretation - strong, audible, dramatically effective. He engaged the audience in eye contact for a moment at the end, re-enforcing the effect of the last line. In comparison, Ros' own reading was poor. (But not many poets could match an actor for drama, so I don't mean to dismiss her performance.) The discussion centred on how an actor, must inevitably focus on one interpretation - and inevitably failed to bring out the poet's many shifts of tone, nuances, subtly suggested several interpretations - which only became apparent on several readings. George Szirtes, co-incidentally, muses on this topic in his blog where he says no two readings are ever the same - even that of the poet themselves, depending on their mood that day etc. http://georgeszirtes.blogspot.com/ entry for 29 March .

I enjoyed a variation on this theme at the Poetry Breakfast: Poems and Song Lyrics, chaired very intelligently and professionally by Roddy Lumsden leading a discussion with Ian Rankin, Simon Armitage, Martin Newell, Stephen Scobie, and Marco Fazzini.

Stephen Scobie had brought along two audio excerpts which really helped. I wish the others had thought to do this too. However, some interesting points were raised about the way in which a poem is like or not like a song.

Multi-levels, as SA, pointed out seemed to be the main issue - necessary in a poem - but death in a song! He also said writing songs is not just a matter of handing it over as a poem. 'Song writing is an art too.' ...'It is a question of intent and integrity.' And how you can't control the pace (of delivery) of a song as you might in a reading. SA's poems 'have their own cadence' and if put to pop music, with its insistent beat, just don't work.

Most of the panel commented on how music can lift the words of a song - 'Music is magic,'as SA put it. Ian Rankin was amusing and self-deprecatory, as ever, acting out his teenage reaction to some words by Bob Dylan 'Wow!!! then ten minutes later 'Oh, that's crap.' He also confessed to his own band as a teenager, the Amoebas - which existed only in his own head but how he had designed the cover of the vinyl discs, the t-shirts etc.

As someone who has tried to write songs - words and music (and I must confess with not much success with the musical side of things)I would have liked more musicians invited - even though Martin Newell was amusing and played us a song - there was no serious discussion or examples of how a musician goes about putting words to song (or v.v.). A workshop might be an idea for a future StAnza, Eleanor? There must be hundreds of singer/songwriters who would be interested in such an event.

I also enjoyed the 'Round Table' with Simon Armitage, where he introduced his reading with the genesis and background to his translation of 'Sir Gawain and the Green Knight'. I had heard some of the stories in an interview on the Radio but enjoyed hearing him tell again of his treatment by the British Library - who did not know who he was and would not initially let him see the MS. 'It does not have any pictures' said the librarian! (Actually, it does as SA explained.)

At his main stage Byre reading, he read some rather prosey new poems (one about a sperm whale was memorable). He said that it was a reaction to spending several years writing the alliterative verse of Sir G . I quizzed him on the use of prose in poetry and he explained that 'prose' in a poem was acceptable as long as it was not 'prosaic.' A helpful tip!

In his Byre reading, the poem that stood out most was the poem about the 9/11 bombing of the Twin Towers used to accompany some film footage showing a man using his shirt to wave from one of the towers before he tires, just as the arm of whoever is holding the camera tires. A heart-stopping poem. How to convey, without spelling it out, the unimaginable horror of what must happen next.

Very briefly, I also enjoyed a New Zealand poet, new to me, Jenny Bornholdt. Not knowing which of her many books to buy, (since buying so many other poets, I thought I better ration myself)so Iplumped for 'Summer' which is about her father's death but also about living in Katherine Mansfield's house in Menton (as part of a writers' residency) - mainly because Katherine Mansfield was one of my mother's favourite writers and she introduced her short stories to me when I was 15 or so - partly because my mother also had T.B. as a child and spent time in a Swiss sanitorium - a terribly, lonely experience for a 12 year old, though luckily, unlike KM, my mother recovered ( and also, unlike my aunt, Georgina, my mother's sister, who died as a child.) This sadness apart, the stories were and are wonderful and so are Jenny Bornholdt's poems. I think I may well have to buy all her other books too!

I was sorry to miss the 'Past and Present' events - where two poets discuss a poet who has influenced them, in particular Jay Parini talking about Robert Frost. These are always fascinating events but I could not make it till the Friday evening this year and also I would have liked to hear more of the foreign poets. There is so much on in StAnza, it is impossible to go to everything one would like.

I managed the Italians however - both interesting in their different ways: Elisa Biagini - an art historian as well as poet: short, not surprisingly imagistic poems. with punch (influenced by characters from European Fairy Tales) and Bianca Tarozzi, who introduced her poems about her house with charming and wry remarks. I bought her book that illustrates the poems with photos of her 'house' or rather the shelves crammed with books, mementoes and memories. 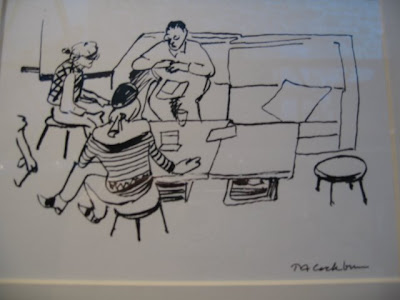 Lastly, I enjoyed the cartoons by Tim Cockburn, (drawn during StAnza 2007) exhibited round the Byre bar foyer . H/w one example to show Tim's humour and eye for line. 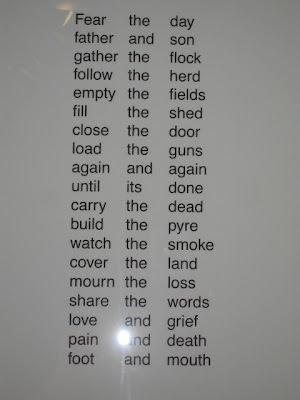 and also Jim Carruth's visual poems, 'Cowpit Yowe.' Some with a sense of humour, but one here tinged with sadness concerning the foot and mouth tragedy.

For my photos of St Andrews, See http://steph.green1.googlepages.com/ and click on link to Photos.

Posted by Stephanie Green at 14:19 No comments: