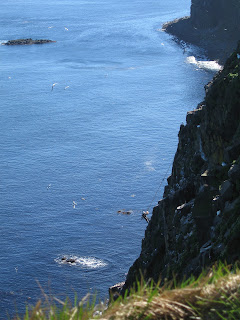 Great excitement! My landlady, Gagga, invited me to watch her husband and others, abseiling the East Cliffs in an egg collecting venture.  Being a Saturday, the men were not out fishing and being May, this is of course the time of year for egg laying - this year, due to the heat wave, laid rather earlier than usual.

This was a doubly exciting experience for me having recently spent 2-3 years researching and writing a poem sequence about the fate of the St Kildans, the  'bird people' who also abseiled cliffs (and climbed up sea stacks) to collect gannet and fulmar eggs, or in their case, also to capture fulmars to eat and milk their oil.  Sadly, the St Kildans could not sustain their way of life and asked to be evacuated by the British Government who agreed and they abandoned the island in 1930.

So I had imagined the bird collecting but never thought that I would see it in action.  I know that this is still practiced in the Faroes but hadn't realized it's still done on Grimsey.  But unlike the St Kildans, the Grimsey folk only take guillemot, not fulmar eggs (which I'm told are sweeter). 'We don't like to be spat on,' said Gagga. (Fulmars vomit a foul-smelling oil if in threat.) Besides, the fulmars only lay one egg a year and the islanders are conscious of  ecological concerns.  If the guillemot's egg is taken, they will lay another one two weeks later. The Grimsey people also take this one, but after that, they leave the third alone: not only so there will be a future generation but because they know that if a fledgling is born too late in the season, it will not grow strong enough to cope with the migration ahead.

Imagining the bird collecting is of course no substitute for the terror of the real thing.  Just peering over the edge of the 300 foot sheer cliffs - keeping well back because of the wind, and also the instability of the cliff tops, undermined by puffin burrows- was terrifying enough. A glimpse of white crests breaking on rocks and brilliant blue sea below, the tiers of black guillemots lined up on the cliff ledges was enough to give me vertigo.  Far worse for the man actually abseiling - relying on the rope, his harness, the men above and the strength of the tractor to take the strain. So some things have changed from the St Kildans' days - they had no tractors, nor helmet (to protect against dislodged rocks) nor walkie talkies - but even so, I don't think I would have the courage to do it. 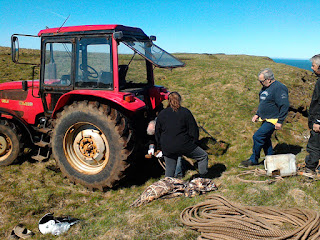 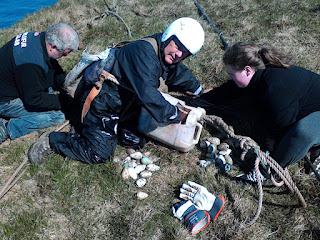 The eggs are enormous - the size of my palm plus two finger joints. Round at their base and tapering at the top, perfectly shaped to prevent rolling off their cliff ledge and an exquisite turquoise blue with brown or black markings - apparently each unique so their parents recognize their own. 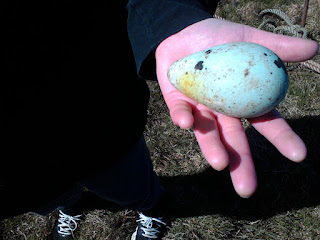 The next morning Gagga boiled me one for breakfast and stood over me so I had to eat it.  With great apprehension I sliced through the almost translucent white at the tip and contemplated the dark yolk inside, then forced a tea-spoonful down.  Surprisingly not bad!  Much stronger than a hen's egg, with a fishy taste - a bit like the texture and taste of the dark meat in a crab. The guillemots feed on sea-eels.  'Another one?' asked Gagga.  Er, no thanks - besides it was very filling.

Posted by Stephanie Green at 13:03 No comments: