Happy memories.  Photos of the big night 'Night Airs' at the Soundwaves Festival:

Back from my reading in Skerries, County Dublin a week ago.
Such a pleasure to view the Mountains of Mourne from the seat where my ancestor, Percy French 'allegedly' wrote his famous song of that name.  The Mournes were a little pale but at least visible, which they were not the next day when the mist came down.

It was also grand to read my poetry inspired by Shetland and to discover that Skerries was founded by the Vikings and there are lots of Norse place names.  So the occasional Shetlandic word went down well at the 'Night Airs' event at the Soundwaves Festival.  Skerries being a harbour town also meant that all the references to seabirds, boats and nautical stuff went down well.
Such a pleasure to read with other local poets too, including the M.C. Enda Coyle-Greene and hear the local musicians, including a tune on the uilleann pipes and an amusing, riskee song from the Mayor.  The night rounded off with the incomparable jazz guitarist, Hugh Buckley.

Posted by Stephanie Green at 18:34 No comments: 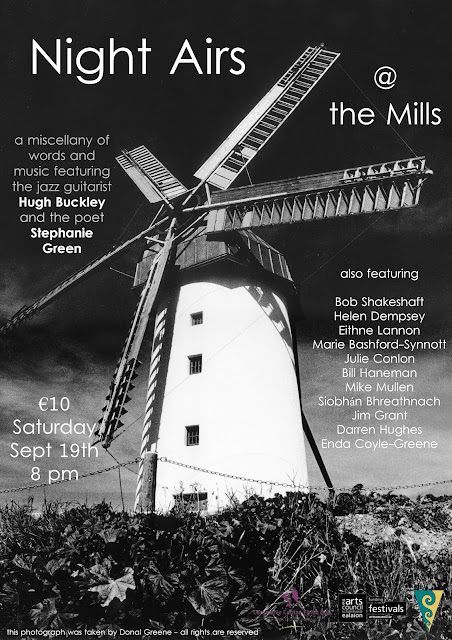 Part of the blurb:  an eclectic miscellany of vibrant words and music, and undoubtedly one of the highlights of last year’s Soundwaves.... (in) the uniquely atmospheric surroundings of the Mills after dark.
It will be great to read with Enda Coyle-Greene and  many other poets, along with Hugh Buckley and other musicians.

I'm particularly excited to be going to Skerries as it is where  'The Mountains of Mourne' is said to have been written.  I know a lot of English and American people think that this song is Traditional and therefore by Anon.  But it was in fact written by the famous Percy French, an Edwardian singer, songwriter (and watercolourist) beloved in Ireland where everyone knows his songs and still sings them.  I am particularly proud to be a kinswoman (on the maternal side).  There's a fantastic view of the Mournes from there and the locals have placed a bench in his honour at the spot with the best view where he probably stood.   I'm looking forward to sitting on the bench and looking at 'where the Mountains of  Mourne sweep down to the sea'.


More info on:
Night Airs-words-and-music-Skerries-Mills
Posted by Stephanie Green at 22:51 No comments: