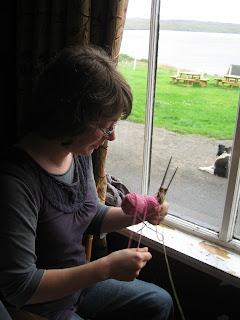 
This is the second year running I have attended 'Makkin wi Wirds' the poetry writing course tutored by Jen Hadfield up in Shetland in August. As well as being a wonderful poet, Jen is an inspiring tutor and not only that, the week combined an experience of Shetland that I would never have managed by myself and provided subject-matter for more poems. Enough to blow you away (and it's windy up there). I can't recommend it highly enough. This year a special long weekend on Fair Isle staying at the world-famous Bird Observatory was added on for the poets.
Wow. Not that I am a bird-watcher sort of person with binoculars and passion for ticking off rarities but if a bonxie happened by, well.


I was particularly lucky in that the Scottish Arts Council gave me a grant to cover my trip and the course towards developing my poetry for my collection in progress. And having just had a hip operation a few months ago, it gave me the incentive to do my physio exercizes to ensure I would be strong enough to cope with it. Without that carrot, I don't think I would have been so disciplined.


It was an amazing week. It is part of the 'Fiddle Frenzy' run by Shetland Arts which runs classes in traditional fiddle-playing but also includes a course for painters and in Shetland knitting. Everyone has their separate classes in the enormous, baronial castle-like Isleburgh Centre in Lerwick but on two mornings the workshops are held in different parts of Shetland, involving an early start for a coach and/or ferry trip to various islands or remote areas of Shetland where the workshops are held on arrival. Village halls, kirks, primary schools etc are commandeered for the workshops. 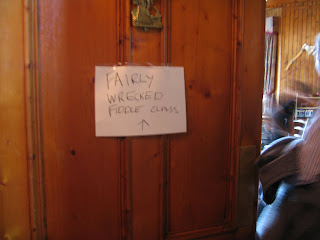 But the week is not just workshops. Afternoons are free to dabble in one of the other subjects on offer if you want or go on coach trips with story-tellers as guides to places of historical, geological or other interest in the areas (a croft house museum, a water-mill, a seal sanctury, a mussel farm, lighthouse built by Robert Louis Stevenson's relatives, and Shetland ponies of course).

Evenings are spent listening to concerts by the fiddlers, both students, locals and professional groups. Last year I heard the incomparable Aly Bain. There are also ceilidhes, all ages dancing together from 4 to 90 year olds. There's a late night Club for more fiddle-playing, a wee dram or two and a quiet room for more story-telling: Davy Cooper, Lawrence Tulloch and Elma Johnson are the residents, hotly contested in late-night competitive sessions by visitors from New York to Penicuik.

Last year we went to Whalsay (which the locals pronounce Whalsaa) and visited Christopher Grieve, (better known as the poet Hugh Mc Diarmid)'s basic cottage where he lived in dire poverty with his wife and small son for 7 years before WWI ; it is now let as a rather basic hostel and the current occupants let us in to have a look round.

On another trip last year, involving two ferry trips, we visited remote Fetlar, the second northernmost island (after Unst). This year it was to Yell and Hillswick, workshops at the atmospheric wood-pannelled rooms of the St Magnus Hotel (a wooden structure brought over from Norway). Both years incorporated visits to the dramatic wild cliffs with their blow-holes and geos of North Mavine at Eshness. A must.

It is a great way to experience the varied landscapes of Shetland and also frustrating, as it is just a taster and made me long to go back and experience it for longer - or to see yet more areas we
did not cover. 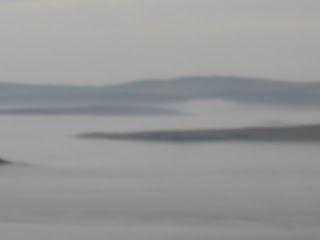 View from Yell in the early morning haar.

But I have some wonderful memories: driving through the haar (sea-drift) rising off the sea between islands and taings (tongues) of land appearing through them in the morning, the silvery light on the voes and sea when the mist cleared, and standing on the open deck of the Hendra ferry on the way to Whalsay having my head brushed by a squadron of gannets flying past with their six-foot wing-span.

And the add-on weekend in Fair Isle was the most exciting trip I have had for years! The ferry crossing from Grutness in Shetland to Fair Island is notorious: vast tides down from Iceland and from Norway either side of Shetland meet due south, just where the ferry crosses, then there's the 'Roost' of local riptides round Fair Isle itself. I met a F.I. local who warned me that even on a calm crossing it can be bad. Total panic. We rushed off to Boots and bought Traveleze and acupunture bands. Well, all was fine. But the return crossing which was rough, well, nuff said.
All I can say is, fly if you can afford it - also if the plane flies. On the day I left it was too misty for the plane to land and people were stranded for 3 days. Not so good if you have a connection to New York to catch....though actually I would miss the chat with the Skipper, Neil, if I did not take the ferry.

Ah, but the isle itself. I see why the Vikings called it Fridarey - island of peace. After that crossing it did indeed seem like heaven. Life in an isolated island (it is actually the most remote inhabited island in the UK) is fascinating - I met everyone in the first few hours - the skipper (or Master) of the ferry, the Good Shepherd, having invited us to a ceilidhe (the non-dancing kind) that night - so we met all the locals and heard a few of the members of the folk group, also called Fridarey, playing in the Puffin House (a bothy owned by the National Trust) - the whole group are members of the same family, but that night we heard only the skipper, uncle Neil Thomson, Lise Sinclair (fiddle-player and singer) and Lise's father. Fridarey are well-known at folk festivals. A special treat to hear them on their own patch with a small group of locals, N.T. volunteers and us listening, whilst the children played football outside in the still half-light of simmer dim at 10pm below the South Lighthouse (one of RL Stevenson's relatives of course). 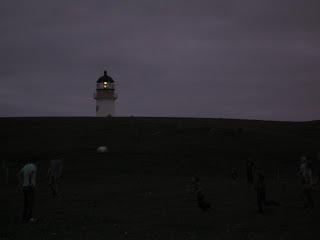 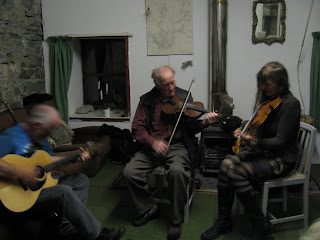 Members of Fridarey: Neil Thomson, Lise's dad and Lise Sinclair.
Hear some tracks of Fridarey's album 'Across the Waters'.
http://www.scotloads.co.uk/album.php/802/

As for that bonxie (the Shetlandic name for a Great Skua) - I had heard tales of this brown menace, the pirate of the north, the size of a buzzard (probably bigger) that eats other birds such as kittiwakes, or by forcing other birds to drop or regurgitate their meals. It lives out at sea except when breeding when it nests on the moors. The B52 bombers of the bird world, if you approach too near they will attack. And yes, I was shadowed by one. Out walking on the moors on the way to the North Lighthouse (yes, RSL's dad) it felt like being in a Film Noir, stalked by a secret agent. Every time I looked round it sank out of view but there it was again out of the corner of my eye. I was lucky. My friend Jean was attacked as she crossed a field - 10 different strikes. Luckily she had a hat with a deep brim on and kept her head down.

Staying at the splendid new Bird Observatory was an interesting collection of individualistic people - not all bird-watchers (because as you'll know if you are a twitcher that August is not the best month - puffins have left, and the autumn migrations have not started) but a Danish writer researching his next novel, 3 yachts-people who were sailing from Norway to Cornwall (to Rick Stein's Padstow restaurant to be precise), several PhD students working as volunteers for the bird-ringing, Americans and Norwegians. Tales of the Faroes, Iceland and Norway. Hmm.
Once you're up in Latitude 60 degrees North, those places feel so close, your neighbours in fact, only a Viking long-ship journey away. 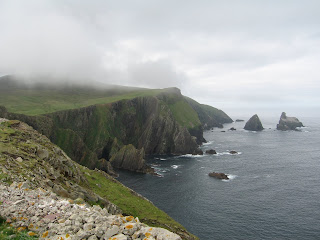 The coast of Fair Isle from the North lighthouse - showing pretty obvious reasons for the need for the lighthouse.

Oh, as for the hip. Yes, it did hold out. Despite falling down a rabbit-hole - I was too busy looking through my camera. And I have a pocket-full of new poems!
Posted by Stephanie Green at 17:43