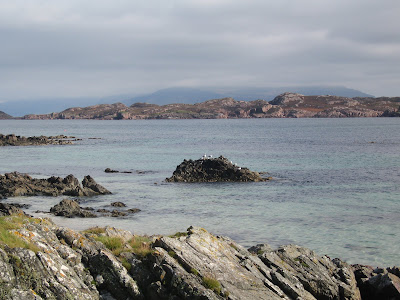 More photos up for our Sense of Place poetry writing course on Iona (tutored by Mandy Haggith and myself.) on link below.
Blissful weather, blue skies, sun and only grey on the last day. We even managed to land on Staffa and got inside Fingal's Cave. That's the third time I've taken the boat trip and only the first time I've actually managed to land. So great excitement.
It was quite choppy and getting on and off the ferry at Staffa was just a wee bit heart-stopping. One slip and...churning seas smashing the boat against the pier and you in between. And then there is a narrow channel between Staffa and a baby island (also of hexagonal basalt blocks) through which the waves pour and hurl themselves ferociously into the air just where you need to pass, holding onto a very fragile handrail...so before you even get to the cave you're fully psyched up.
Our skipper told us we would not get the full orchestra that day as it was not quite rough enough. Do they have an orchestra in there, someone asked. No, it's the sound effects of wind and waves, he said. So we went one by one down the slippy steps to the roped off viewing/hearing area and were amazed to hear not just the smash of waves on rocks and booming echoes, but after the waves subside and before the next onrush there is a pause and then it happens: long musical notes like an organ, or even a brass instrument followed by booms and a deep drum roll ending with the tinny shh of cymbals. Well, that's what I heard. Others heard other music.
Mandy's writing exercize for the trip produced some very rhythmic sound poems, appropriately. In the evening we listened to Mendelssohn's Hebridean Overture. (Well, you have to, don't you.) I was very chuffed that it worked: downloaded (by my son for me) from the internet and played on my computor plus using mini-loud-speakers. Not sure the sound quality was up to the standards of one of our students, however, who is a viola player in a national orchestra!

On other days we visited the Abbey and environs and Heritage Museum for workshops and afternoons were free for the group to walk to the many isolated white beaches. There's a very spooky atmosphere on Iona and many poems came out of its history as the Isle of the Dead, the ancient burial place of the Lords of the Isles and Kings of Scotland.

However, the delicious food kept us cheerful - fresh crayfish caught that day to be had at the Martyrs' Bay restaurant and chocolate fondue desert, kept warm with nightlights, at the Argyll Hotel was another highlight.
Atmospheric island, plenty of history and stories, remote landscapes and time to write with like-minded souls, or wander off on your own to isolated white beaches. Can't all be bad, despite the soaking one student got on the ferry home! A rogue wave and no time to move out of the way.

We are already planning next year's course...possibly a trip to Iona for a new group of students...and a different location for those who want somewhere different. Keep watching this blog.
http://steph.green1.googlepages.com/ionasenseofplace2
See side-bar for Photo Gallery: 1) Iona and 2) Past courses (for students and trips)
Posted by Stephanie Green at 08:41 No comments: