Mist and mystical moments at Poetry on the Lake


Posting late as I went down with flu after a trip to Italy. (The wages of sin or La Strega, a local aperitif which means 'witch'? 'Nuff said.)

Mist and sun, this time at the Poetry on the Lake Poetry Festival, at Orta San Guilio.(27th Sept-1st Oct)
It was lovely to be back, (my third visit), especially to see familiar faces and old friends for a few days of pasta, vino and poesie.  I was also delighted to be invited to have a 10 minute reading slot in the Pallazotto, the 17th c town-hall along with other poets.

Gillian Clarke, the judge of the competition, had awarded a Highly Commended to one of my poems. ('Stac an Armin'.) Gillian's was the first poetry workshop I ever attended back in the 80s in a shooting lodge overlooking Llyn Cregennen, and Cadair Idris  in Wales. (See my earlier post on Gillian Clarke)  So it was particularly special for me to meet Gillian again and reminisce.

Other headline poets were Carol Ann Duffy (who comes every year as she is the Patron of the Festival), Penelope Shuttle and Imtiaz Dharker.  Penny's poetry I have read and heard many times, and she is always wonderful.  Imtiaz was new to me - and delightfully surprising and funny.  A respectable-looking lady, she read shocking poems, with an unexpected use of racy language and a satirical  punch.

It was also great to hear Wayne Price,  the Silvern Wyvern  prize winner's poem about crows in a playground.  The competition theme was 'beastly' and most of us had chosen mythic or horrrific beasts, so Wayne's choice of subject and treatment was understated but the more frightening for that.

Two other poets who gave terrific readings were Katrina Naomi and Caroline Carver.  The poetry in Katrina's book 'The Girl with the Cactus Handshake' (Templar) certainly lived up to its title:  striking, prickly and noir with clear-cut imagery and language;  about her experiences growing up in Margate, and later in the East End- a particularly funny one about lying dead drunk on the floor of a pub in the Elephant and Castle with  'let's call him Andy'.  I complimented Katrina on her forties' outfits and the flower in her hair and learnt she is a fan of Lindy-Hop.

Caroline Carver's latest pamphlet 'Tikki-Tikki Man' (Ward Wood Publishing) is about child abuse and the dream-landscape she and the abused friend invented to cope with their father's 'friend'.  Horrific, nightmare stuff set in the Caribbean island she grew up in, evoking the real landscape, sights and sounds vividly.

There is also much more than poetry at the festival and each year I've been, Gabriel Griffin, the organizer, manages to treat us to new experiences.  This time it was a piano recital ranging from Mozart, Clara Schumann to Chopin held  in the Sala Tallone, part of a 17th c pallazza on the island.  Most surprising was to see that the pianist, Ilan Zajtmann,  was an 11 year old.  It made me think what it must have been like seeing the boy Mozart himself play.   I ended up in the overspill, the stone terrace outside but I think this was a bit of luck, as piano strains mixed with the sound of water lapping and bells floating across from around the lake.


The traditional poetical pilgimage round the Sacre Monte, where everyone is invited to read a poem outside chapels which wind round the mountain, with views of the lake below through shady pines and cypresses, was a charming experience - and a way of getting to know others at the festival. 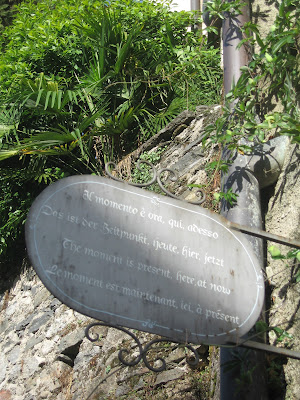 I managed to slip away  to walk the 'silent path' round the island by myself too where overhead signs invite reflection.

Another special  event was a celebration of the 14th c mystic,  Hildegard de Bingen, (whose canonization was announced last May - the Papacy takes its time) with a performance of her music, sung by Julia Berger accompanying herself on opaque white glass bowls.  Performed in the dark, lit only by candle-light, Julia, who has long blonde hair and wore floating robes, looked like a prophetess or priestess.  The music was trance-like and eerie, the singing bowls with a strange, haunting resonance, like a hum or gongs. The performance took place outside a herbal remedies shop, 'Thesaura Naturae', which uses Hildegard's recipes. (She has quite a New Age following.)  The music was followed by various poets, including me, reading poems inspired by Hildegard. The whole event was a magical, never to be forgotten experience.

But just in case you think the whole festival sounds far too serious, here are some photos of the more earthly delights: