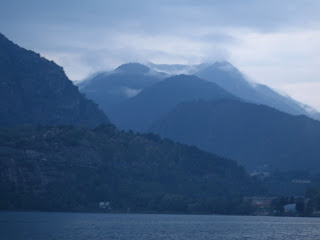 Photo near Omegna taken from the ferry on 'the Poetry Cruise', part of the Poetry on the Lake festival : poets reading poems in the anthology 'Reflections on Lake Orta' published to celebrate the 10th anniversary of the festival. A local singer and accordianist also regaled us on the journey.

A rather misty festival this year but all the more atmospheric for it. Main stars were Carol Ann Duffy and James Harpur.

I couldn't resist going as I had the chance to read my poem in the anthology and a commended one in the competition so got to read on the cruise and in the pallazo, Salle Tallone on the island - and then again on the Sunday on Sacro Monte two more poems. Phew.

James Harpur is an Irish poet, whom I had met before at Strokestown and it was a great pleasure to meet him again. He had had a 4-week writer's residency in Monaco and came over to Orta to give a talk, 'The Poetic Journey' which wore its erudition lightly and was illuminating and very engaging. He compared the via negativa and the via affirmata of the mystics with poets' journeys: in love with words (like Dylan Thomas) or spare and minimalist. Poets tend to fall into one or other category mainly. He did clarify ideas I have had in the back of my mind - mainly about what inspires poets - 'Identity' (your roots) and the 'Other' (what takes you beyond yourself). The latter became a buzzword over the weekend for all those who heard the talk - semi-humourously but of course, something we took seriously too.

Unfortunately James did not give a poetry reading, apart from his lovely 'Roscommon Rain' which he chose because it was raining on the last day when everybody gets a chance to read one poem in one of the chapels, part of the 20 chapels on Monte Sacro above Orta - another journey (the chapels were built as a way of prayer in honour of St Francis and became popular for pilgrims.)

On Saturday we ferried across the lake to the island of San Guilio to hear the winners and commended poets and for the prize-giving. This year, the first prize of the Silver Wyvern was given to Emma Harding, whose poem was about a slave who is thrown over a cliff for some minor transgression displeasing the Emperor Tiberius. The poem is the last thoughts of the slave as he 'reflects on inevitability' and finally 'the blue.' His watery death summed up in one word - masterly! (I'd say that was a wonderful example of the 'via negativa' .) You can read the full text of her poem, and that of the other winners in Orbis magazine, Summer 2010 edition (152)

Carol Ann Duffy also read four poems, followed by readings in Italian by her translators. One of the poems was 'Valentine' and she had brought along a real onion which she presented to Gabriel Griffin, the organizer of the festival, as a mock present to mark the 10th anniversary.

On the Sunday, (when James read his poem) we were in for a surprise as the owners of one of the apartments in the converted Conventino, next to the main church on Sacro Monte, invited us in to what had once been the monks' refectory. Now filled with ornate carpets, frescoes and Venetian pale blue and pink chandeliers, the only reminder of its holy past were scrolls on the wall saying 'Obediencia' and 'Silencio' , the benches round the walls and the wooden border where the monks' feet would have rested as they worked on their manuscripts. (Wood being warmer through their sandals than the tiles of the central area.) Several poets, including myself, gave readings here in these splendid surroundings before we set off for the chapel readings which, this year, were held in only one, due to the rain. It was so misty it was impossible to see the view of the lake and its jewel, the island but never mind...

I was fortunate that I had been before in 2008 when mist was followed by blue skies and shining red berries and ivy. This year the colours were muted, the ivy was still green, the frescoes in the village faded, the atmosphere melancholic but in some ways, it is good to see a place in all its moods and it was certainly almost more romantic.

It was great to meet and hear fine poets I met last time: Caroline Carver (who won the Silvern Wyvern in 2008, and incidentally has won the National Poetry Prize)and Elizabeth Rowe (whom I'm delighted has found a publisher for her new MS (her former publisher Peterloo having become defunct). She is now with Oversteps. Also to meet and hear new, to me, poets, especially the urbane and witty poetry and person of Christopher North (who runs the well-respected and delightful sounding Alamassera writing courses in Spain).

A special pleasure was discovering the poetry of Victoria Field, who with Penelope Shuttle and Caroline Carver (all three Falmouth-based) had toured N.Y. and Canada reading their poetry together and produced a pamphlet to celebrate the trip. Victoria's poetry is intelligent, and accomplished and I hope she'll soon have a new collection out. Her first one is sold out. You can hear her read (and/or read the text) in the link below .(Also Caroline Carver).

Pat Borthwick is a poet whose name keeps cropping up in all the prize winning lists of competitions, so it was good to meet and hear her at last. A new, for me, Italian poet of interest was Tiziano (I discovered the anglicized form of his name is Titian!)Fratus whose work is translated into English and who has toured the States. A trip to Britain is surely in order.

You can see more photos of Orta SG following the Photos link on my Home page, http://sites.google.com/site/stephgreen1/
and read about the 2008 festival on my blog for 21st Oct, 2008. Stephanie Green's Blog/Journal: Poetry on the Lake Festival, 2008

Posted by Stephanie Green at 18:59 No comments: