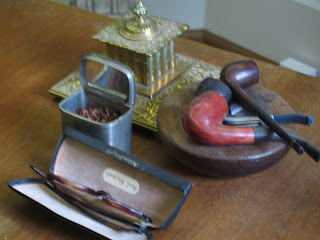 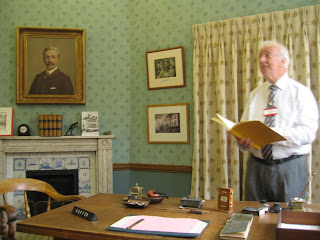 So Hub and I, having spent rather a lot of time there already on previous days, had just popped in, yet again, as you do, to fill in the last half-hour before we had to dash to catch the train back home, when we were inveigled by the charming Paul, guide to the Blackwells' tour. Why not? (We'd only buy more books if left unsupervised for half an hour.)
The very spot we were standing in (the few feet at the entrance) used to be the original bookshop, at 50, Broad Street,founded in 1879. Considering the massive operation Blackwells is today, it was amusing to contemplate the 14 square feet which was the available floor space between the piles of books of those early beginnings. If more than one or two customers entered at one time, the apprentice had to exit by the back door and hover there.
The apprentice had 'to undertake not to contract marriage, gamble with cards, haunt taverns or playhouses'. So the White Horse pub next door was out of bounds. Fred Hanks, one of the earliest apprentices was presented to Mr Blackwell by his mother: 'I hope he'll be a good boy,' she said. He stayed for twenty years. One of his duties, incidentally, was babysitting Basil Blackwell.
Then as today, 'university students in the afternoons did Athletics, took a walk, or went to Mr Blackwell's in the Broad.' Its philosophy, as today, is summed up in: 'We browsed at leisure and no one came to disturb you.' The only disturbances in the early days might be the book-banging on the pavements outside, where books were cleared of dust, thus frightening the hansom cab horses.
Blackwells went on to publish poetry by Robert Graves, Auden, C.S. Lewis and Spender, children's books by A.A.Milne and Walter de la Mare. Later Blackwell founded the Shakespeare Head Press.
Upstairs, Paul took us to the first-floor office of Mr Blackwell, and explained that his editorial assistant was one L. Sayers. He 'admired her witty mind, with reservations', which indicates she was better suited to her career as Dorothy L. Sayers, the crime writer. Her office is now part of the cafe.(The bit that has a fire-place and has the feel of a 19th c room.)
I won't spoil Paul's tour by recounting all his stories. You'll have to go for yourself. Highly recommended.
And a P.S. from Paul - he also does tours of Oxford in the summer months.
Posted by Stephanie Green at 12:12 1 comment:

One of the highlights of the StAnza festival this year for me was discovering the wonderful Roncadoro Press. Initially I was attracted to their stall at the pamphlet fair, as I wanted to buy my friend, Jean Atkin's latest book. And what a find! This is a lovely book, with moving poems, full of the sound of the wind and sea, by Jean, inspired by her Shetlandic ancestry, of sailors and shipwrecks, hardship and emigration, with evocative, atmospheric illustrations by Hugh Bryden, who runs Roncadoro Press. 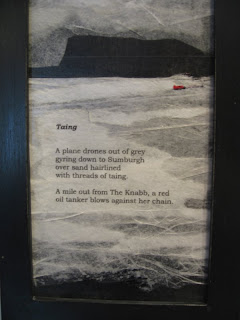 Jean's book, 'Lost at Sea', is available in three editions: a paperback printed version, a hard-back printed version and a case-bound edition, of the original artwork, a collage with Japanese hand-made paper scrunched to suggest the wild Shetland seas. Above is a single, framed page from this book, part of an exhibition of the Press's other Artist's Books in the Preservation Trust Museum.

As you'll see, each book is different but Hugh's interest is in graphic design, whether woodcuts (reminiscent of Masreel) or fine pencil. All 'Black and White', as the exhibition was called. Not all are 'books'. Some are fold-out one poem paper concertinas.

So far, the poets in his 'stable' are Andrew Forster, Hugh McMillan, Rab Wilson, as well as Jean Atkin. 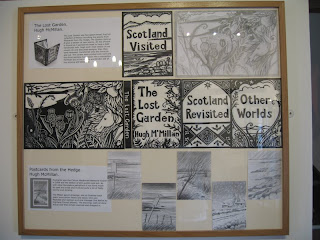 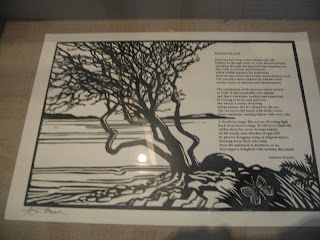