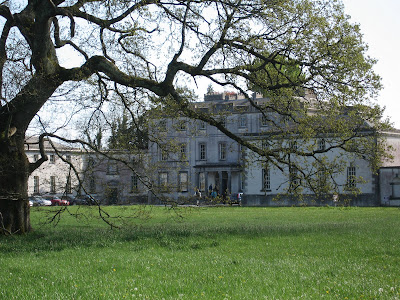 It was a tremendous festival, a privilege and terrific opportunity to read with Big Names and meet fellow short-listed poets in such a friendly and welcoming atmosphere in the beautiful but homely Strokestown House. The gold on the wall paper glinting behind the poets reading in the evenings, the lambs peering in during the day-time readings (now I know why actors prefer not perform with children or animals), everyone sitting on the sofas, flipping through Country House magazines in the breaks (I overheard a local say that previously they would not have been allowed in the grounds, let alone the house and wasn't it amazing we were all making ourselves at home in the sitting-room), the lovely garden tour and the last night Hoolie in the Victorian kitchen are some happy memories. I loved the way the whole community was involved with the schools' competition readings, the late night pub readings and the satirical verse competition - a great balance to the more literary readings.
It was good to catch up with the Irish poetry scene too - although I do subscribe to the Poetry Ireland online newsletter and read the various literary magazines it's not the same as actually going to hear the poets read. John F. Deane (who founded Poetry Ireland and others) came late on the Sunday as he had previously been reading at the Heinrich Boll Festival on Achill Island (where Deane comes from), Paddy Bushe, Eilean Ni Chuilleanain, (Editor of Cyphers literary magazine), Celia de Freine, James Harpur, Penelope Shuttle,(from Cornwall, of course, not Ireland), Joseph Woods (Director of Poetry Ireland) were the major poets who read.

Deane, Bushe and Harpur's poems had similar themes concerned with spirituality, Deane and Bushe springing from Gaelic culture. Paddy Bushe who lives in Waterville, has a sequence inspired by Skellig Michael - that remote, craggy offshore island where the early Celtic monks were hermits and I was particularly impressed by the scathing edge of his political sequence on Spenser, referring to the massacre at Dun an Oir (Smerwick) perpetrated by Lord Grey, (Spencer was his Secretary and wrote an account for Elizabeth) and Sir Walter Raleigh, who figured out a quota for each soldier:
'That body count worked out at five per man
That tidy mind would make a sonnet scan.'
( From 'Poets at Smerwick' in To Ring in Silence (The Dedalus Press, Dublin, 2008)

James Harpur's The Dark Age (Anvil Press, 2007) is poetry of a fine musicality and precision. I discovered the truth of his poem 'Roscommon Rain' in the days following the festival when the heavens opened. You can read the whole poem on the Poetry Ireland online newsletter but this will give you a taster, a few lines from the middle:
'Swept, soft again, like a haze of locusts
Across the ridge, then shifted shape in sudden wind
Drifting, finer than chimney smoke,
Like a passing pang of some great loss
Away from where more rain was coming in
From somewhere else beyond the world's rim....'

Celia de Freine (who writes in Irish Gaelic as well as English) introduced her reading by congratulating Carol Ann Duffy on her Poet Laureateship, just announced. Her own poems were a refreshing burst of felt experience (mainly female but not all,) mostly as dramatic monologues - some resonances of Carol Ann here, reaching out to a wider politics, beyond Ireland to Belarus, the world of soldiers and refugees.
Her voice is direct, colloquial, a voice speaking to you, the opening lines straight in, grabbing your attention:
'Emilia says that for all the world
she'd sleep with another man. How quickly
love turns sour.'
(From 'On my bed my wedding sheets')
or
'It's a strange thing this poetry, the way
It can take over our lives, dictate how
we eat, drink, sleep...'
(From 'Never defter nor smarter')
Both above poems in Scarecrows at Newtownards (Scotus Press, Dublin, 2005)
Not surprising to learn that she is also a playwright and screen-writer. It's hard to quote just a few lines, since the poem has to be read as a whole to appreciate their qualities as story.

A special pleasure to hear Penelope Shuttle read - expecially as I had heard her read at the Falmouth Fesitval only the week before - she read the same programme but as I love them all, it was a double pleasure to hear them again and begin to get to know them. She also reads with great clarity, giving her words a serious weight without over-stressing, beautifully modulated, so that it is an extremely moving performance. Many of her poems are litanies, and work by the juxtaposition of the unlikely, or quirkily humourous with the deeply felt:

'A poem stays awake long after midnight
taking you from room to room,
does not care that walls have ears,.....
Every year
a poem tosses a young woman from the cliffs
to the rocky sea below
A poem acidentally sends the entire letter f
off to Florence
but keeps the letter t
in a matchbox, like a tiny contraband tortoise
Sometimes
a poem is your only daughter...'
(From 'Poem' in 'Redgrove's Wife')

Many other poets, too numerous to quote, were memorable, especially hearing poems read in Irish Gaelic. I couldn't understand much of the Irish but pleased to note that when written down, my Scottish Gaelic helped me pick out quite a bit. Great to put a face to a name in Jo(seph) Woods' case - as Director of Poetry Ireland - and experience his ironical sense of humour .
I had not expected to win the competition - just delighted to be chosen as one of the short-listed. The first prize (of the English language section) went to Padraig (which I discover is pronounced Poric) Rooney - well deserved. He has several collections out but as he lives in Switzerland has been rather over-looked. I'm sure all that will change now. He will be reading at the Troubador, Earl's Court, London soon. Incidentally, Angela France, another shortlistee, will be reading at the Ledbury Festival in July.
More personal connections for me: nerve-wracking experience of my own reading , when Eilean Ni Chuilleanain was in the audience, whose lectures I attended when a student at Trinity back in the mid-60s. Also meeting Margaret Hickey and Merrily Harpur (organizer of the Festival) and learning that we were all contemporaries at Trinity - tho we didn't known eachother then. So a few reminiscences about people we knew in common.
On a more particular, personal note: It was quite a surprise to realize how much Percy French still means in Ireland and what a crowd the satirical verse event drew, from all over Ireland. Even more of a surprise to be invited to present the prizes, as a PF kinswoman. (*See below)Nice to be connected with one of the Anglo-Irish who was loved in Ireland - a pleasant change, to balance the grim but necessary task of going round the Famine Museum.
I stayed for a week in Strokestown after the Festival ended as I was invited to the Percy French Society AGM in Roscommon town - I joined them once the 'business' side of the meeting was over and had great fun listening to all the stories - their sense of humour exactly the same as that of Percy French himself. I also stayed on to visit the sites (mainly Ch. of Ireland churches) my Percy ancestors were connected with: one now a Heritage Centre, another a ruin, another a public library. So it goes.
*Note: the Percy French connection: through the maternal line -PF's mother and my maternal great grandmother were sisters, Susan Emma and Jane Caroline Percy, daughters of the Rev William Alexander Percy, Rector of St. George's Church (Kiltoghert parish), in Carrick-on-Shannon (Co. Leitrim, just over the Roscommon county border.) So I am PF's second cousin, twice removed. Thanks to my friend, Caroline, who studied Anthropology and has worked this out for me!
More photos: I shall be putting up more photos on my Facebook page and also on my main webpage in due course http://steph.green1.googlepages.com/strokestownfestival
http://www.strokestownpoetry.org/
http://www.jamesharpur.com/
Posted by Stephanie Green at 09:24 No comments: