The Great Auk on Papa Westray plus COP 26 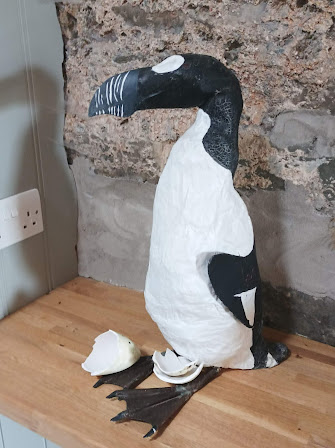 During my last visit to Papa Westray I also saw in the Kelp Store a papier mache sculpture of the Great Auk, the last one killed on Papay in the 19th c so that it's now extinct.  One was killed on St Kildan sea stack in 1840.  I've written a poem 'Stac an Armin' about the St Kildan killing published first some time ago, and I'm very pleased it was also  chosen to be performed at Dove Tales latest online event 'Mourning our Planet?' (which took place during Glasgow's COP 26).  The  pamphlet will be published shortly.

On its lower rocks, a strange creature,

a little taller than our knees,

her arms, draped in black, by her sides.

She dived and flew underwater,

Hauling herself out, she shuffled

A curiosity.  We'd show her off

back home. It was easy.

squawking into a stone cleit.

sea and sky lost in one

as she cursed us from her cell.

One man picked up a stone

and squeezed inside. From outside,

we listened to the cries and thumps.

As the screaming rose, we stopped our ears.

He crawled out, bleeding and torn.

A second man entered with another stone

and crawled out bleeding and torn.

And a third man entered with another stone.

And a fourth man entered with another stone.

And so it went on until all seven,

apart from me, had entered the cell

and crawled back, bleeding and torn.

Entering her cell, I held her down

and felt her warm, feathery breast

flutter, as I raised the last stone.

Highly commended in the Poetry on the lake competition, 2012; First published by Orbis, 2013.

Posted by Stephanie Green at 19:46 No comments: