Beauty and the Beast: Venice and the Rhino 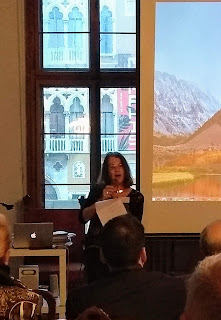 At the Beauty and the Beast Symposium held in the
Palazzo Contarini Polignac, Venice.

I must confess that with the news of the acqua alta, the highest flooding in Venice since 1966, happening only 3 weeks before my visit to Venice, I was in trepidation.  Would there be another flood? Would the access to my hotel be impassable? Could I even get to the symposium?  As it turned out, I'm so glad I did not cancel my visit. The symposium was an amazing experience and my fears about acqua alta completely unnecessary, as you will discover below.

It was indeed an incredible experience, in which I felt both honoured and delighted  to read one of my poems as part of the 'Beauty and the Beast' Symposium about Venice and the Rhinoceros: both fragile but resilient. Held in the stunning Palazzo Contarini-Polignac (with its glamourous history) on the Grand Canal, Venice, it was a fascinating day listening to social historians, activists, the brilliant poet, Ronna Bloom (from Toronto) followed by the vernissage of two artists Gigi Bon (from Venice) and Shih Li-Jen (from Taiwan) organized by Catherine Kovesi (from Melbourne University). So it was truly an international event with representatives from the Occident, the Mediterranean, the Antipodes, and the Borealis  there! 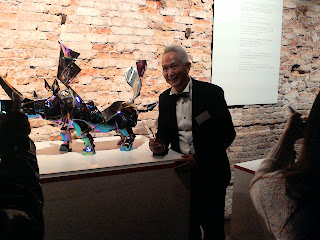 Here are photos of Shih Li-Jen and his striking metallic rhino (above in the vernissage)
and another (in the symposium) of him demonstrating  the bouffant style of hair inspired by the rhino in Paris in the 18th c. 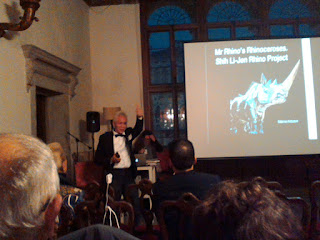 I will certainly make a trip to Gigi Bon's workshop in the San Samuele district next time I'm in Venice. It sounds like a wunderkammer of her surrealistic sculptures, or like a Renaissance painter's studio with the trays of pigments she grinds for her paintings on silk scarves.  And I will look out for the endearing mosaic of a rhino on the floor of the chapel to the Virgin Mary inside S. Marco's Basilica. It was this that first attracted Gigi when she was a child and rhinos became her obsession.

It was illuminating to hear Jane da Mosto's account of  'We are Venice here', an activist group. Her message was hopeful. Something can be done to 'save Venice' if we understand that it is not just preserving the beautiful buildings but also about the people and the ecology of the lagoon.  Cruise ships, rising sea levels, pollution of air and lagoon - etc, etc. If you want to know more, I recommend 'We are Venice Here's website. (Below.)

And as for acqua alta, I was surprised to learn from da Mosto that the worst damage was the devastating loss of income to Venice when thousands of tourists cancelled their hotel bookings - seemingly unaware that the flooding is only a temporary affair. It is not like a river flooding but from the high tides which come in, stay for about 4 hours, and then like tides do,  retreats. So next time, if necessary I will just don my hotel's loaned wellies, walk along the raised platforms (like metal tables) and maybe give a hand washing away the mud and debris after it retreats.

As for the Palazzo Contarini-Polignac on the Grand Canal, Venice - the symposium took place on the grand first floor, one long room the length of the building with enormous windows either end letting in light.  Its grandeur rather faded now is all the more romantic.  Do read more about its history, and previous owner, Winnaretta,  the Singer sewing machine heiress who held magnificent musical soirees here for such geniuses as Stravinsky and Faure. Diaghalev and the Ballet Russe came to stay. Yes, I did feel something of an interloper.

You can read more via these links:

Beauty and the Beast. About the symposium and participants

We are here Venice

Posted by Stephanie Green at 17:18 No comments: