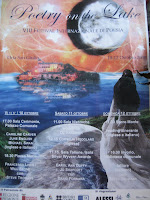 http://www.poetryonthelake.org/_mgxroot/page_10727.html
This may be my favourite poetry festival so far... (tho I think this about every one I go to).
Orta San Giulio, on the least well-known of the Italian lakes, lake Orta. You could not have a more romantic setting or time of year for a poetry festival: changes of light on the lake and stone walls, water lapping or sloshing on the quayside as the small ferry boats go by. There were several readings over the 3 days (Fri eve to Sun morn) and all participants who wanted to were invited to read which was an unexpected bonus. Nice to hear not only the invited guests but poems by fellow audience members who we'd got to know chatting at the dinners. So I also was prevailed on to read - not that it took much persuasion.

And the final evening travelling over the lake by ferry to Isola San Giulio for the performance in the Salla Tallone, part of a 17th century pallazzo. Sheer magic. An idyllic line up too: Jo Shapcot and Carol Ann Duffy along with Caroline Carver, Vivienne Tregenza, E.C. O'Leary the winners of the poetry competition and many of the other poets recommended in the competition, many of the poems followed by an Italian translation read by the Italian poet, Alessio Zanelli (whose own fine nature poetry we had heard earlier). And what with long interminable (in the nicest possible way) dinners of 6-7 courses, sat at long tables with all the participants, poetry, wine, pasta...this is certainly a festival to recommend.

Caroline Carver's poem was packed with historical detail which gave her poem about a slave-trader a serious weight and then closed with a visceral punch. Vivienne Tregenza's was a moving evocation of a Cornish christingle. It will be good to purchase a copy of the festival anthology to read them again.

Jo Shapcot read a selection of Rose Poems which are responses to Rilke (to be found in her collection 'Tender Taxes'), one of my most favourite poetry books. A wonderful setting, in a slightly decaying Italian pallazza, for poems which evoke beauty, love, decay. Here is one:

onto the ground.
Essence of roses is not sweet,
but brown at the edges
like the air you breathe.

Carol Ann Duffy read poems with water associations (at the organizer, Gabriel's suggestion), in particular two poems both entitled 'River' and probably one of her most famous poems, 'Prayer'
which I copied out laboriously into a notebook of 'Favourite Poems' in my 20's when I first came across it and recently re-read it with my son who was studying it for his Advanced Highers (the Scottish equivalent of A level) and still think is a wonderfully evocative poem...it also resonated with the Italian surroundings, especially sounds travelling, as church bells continually float across the lake and throughout the mountains from surrounding villages throughout the day and evening. Their readings were accompanied softly on acoustic guitar by Dario Fornara. Not something that is commonly done in UK - except late night Radio 4. It doesn't suit all poems, of course but was perfect here, all adding to the atmosphere.

Penelope Shuttle was also one of the judges but did not attend. A shame. With JS, CAD and PS, that would have been a triumvirate or should I say trimaterite of distinction!

New (to me) poets I particularly liked were Elisabeth Rowe - wry, witty poems published by Peterloo which, sadly I hear, is winding up and Cornelia Hoogland - from London, Canada -in particular the reading she gave from a long MS, 'Little Red Meets the Wolf in the Wood' and (which I read later) her vivid prose-poem 'Cuba Journal.' http://www.poetrylondon.ca/who_we_are.html
Posted by Stephanie Green at 17:04