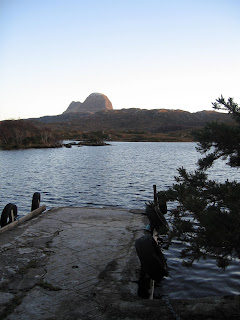 Suilven from Glencanisp, near Lochinver, Assynt. (Photo)
*
Summer Farm by Norman MacCaig
Straw like tame lightnings lie about the grass
And hang zigzag on hedges. Green as glass
The water in the horse trough shines.
Nine ducks go wobbling by in two straight lines.
A hen stares at nothing with one eye,
Then picks it up. Out of an empty sky
A swallow falls and, flickering through
The barn, dives up again into the dizzy blue.
I lie, not thinking, in the cool, soft grass,
Afraid of where a thought might take me - as
This grasshopper with plated face
Unfolds his leg and finds himself in space.
Self under self, a pile of selves I stand
Threaded on time, and with metaphysic hand
Lift the farm like a lid and see
Farm within farm, and in the centre, me.
To celebrate the centenary anniversary of the birth of Norman MacCaig this week, I post my favourite poem of his above. He is one of Scotland's most famous poets, along with his other contemporaries, Hugh McDiarmid, Sorley MacLean, George Mackay Brown and MacCaig's influence has been widespread amongst contemporary Scottish poets.
As you can see from the example above, MacCaig's poetry is lyrical, acutely observed, paired down but emotionally affecting. Known to school-children throughout Scotland are his poems about frogs and the 'slounge' of a monster (a basking shark) he encountered- there is a sort of zen philosphy informing his Nature poems but also an intense socialist vision of a fair community - the buy-out by the Assynt community of the land and several mountains, including Suilven, would have pleased him.
The place to be this week is Assynt (North West Scotland or as Mandy Haggith puts it 'top left corner') this week: where there'll be a MacCaig poetry fest, celebrating his work with walks to places which inspired his poetry, beautiful white beaches like Achmelvich and the isolated rocky landscape round Glencanisp, readings of his work and by visiting poets such as Alan Riach, Roddy Gorman and Liz Lochhead and by the winners and commended poets of the poetry competition organized by Top Left Corner, (that is run by Mandy Haggith, John Bolland and others). The local school children have been involved, writing poems and illustrating MacCaig with their own artwork. The whole week will be a hoolie, with plenty of good craic, and, no doubt, whisky. To round it all off will be a ceilidhe.
I cannot recommend it highly enough. I have been lucky enough to have already experienced some of the walks and views on three different trips I've made to Assynt. The first visit was a holiday with my son, the other two, staying at the former hunting lodge, Glencansip Lodge, now owned by the Assynt community: the second visit, on a writing retreat, where I did, co-incidentally, spend a lot of time studying MacCaig's Collected Poems (Polygon, 2005) which had recently been published and trying to write poems in a similar manner. (Maybe not such a good idea. NmC said to Andrew Greig on being shown his poems when G was 19, that he like them very much. 'But then I would. They're quite like mine. Perhaps you should write some quite like your own' . My third visit was co-tutoring with Mandy a poetry course for OLL students where we took the students to the aforementioned MacCaig places, to inspire their poetry too.
God willing and the creek don't rise, (as they say in the MidWest) I shall be there.
See the week's programme here http://www.topleftcorner.org/maccaigcentenary.asp
But if you can't make it to Assynt, today,(Sunday) there's a programme on MacCaig on BBC Scotland Radio which can be heard on playback for a week. http://www.bbc.co.uk/i/vrwvn/
Andrew Greig can be heard talking about his pilgrimage to the Loch of the Green Corrie (MacC's favourite spot) at the Scottish Poetry Library on Wednesday - and if you miss that, there is also a podcast of Greig on the same topic, on the SPL website 'Reading Room' interviewed by Ryan van Winkle.
Monday, there is also a TV film, 'Fishing for Poetry' charting a similar pilgrimage by Aly Bain, (the internationally known Shetland fiddler)Billy Connolly (no blurb needed) and poet/novelist, Andrew Greig at 9pm on BBC 2 (Scotland only.) http://www.bbc.co.uk/programmes/b00vtxh2
Posted by Stephanie Green at 15:56