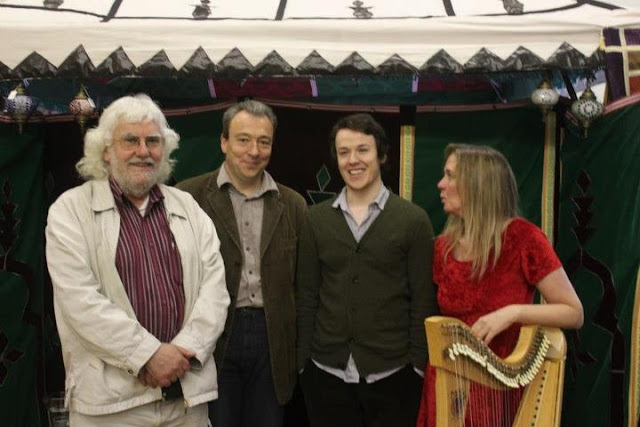 A dreich morning of harvest- end rain and cold did not keep a good crowd from coming to the penultimate PiPT event- the performers handed a glass of hot Persian Tea, with mint and honey from Yousef's Persian Tent cafe to warm them up. And it was a terrific event, warmly received by the audience, a  loyal band of supporters but also others who had loved previous days of our events and came along to sample something new.
I asked Jim Carruth to begin his set by speaking a bit about the charity, since all 5 of these events are in aid of  Old MacDonald had a Farm for Africa, which he devised with the backing of Liz Lochhead.  As a farmer, Jim was particuarly inspired by Oxfam's idea of start-up farms - so that people could become self-sufficient.  A call was made for others to contribute by their own fund-raising events too - it doesn't have to be poetry - anything from sponsored walks to cake stalls. Become a 'Young MacDonald' and part of the effort.

Jim then began his reading and  harvest was a theme that was touched on. Though largely billed by me as a 'Celtic' flavour event, with Aonghas MacNecail originally from Skye and Niall Campbell from Uist accompanied by the Celtic harpist, Patsy Seddon, we also had a lowlander, Jim Carruth who started the readings with poems about rural life- people and animals. From poems about hay-baling as a youth with hay allergy (dressed up in balaclava, boiler suit and gloves in the heat)- a great way to lose weight, he quipped,  to a rollicking narrative poem about a young gal forced to dance with all the ageing farmers at a ceilidhe and being birled about by all of them, with humourous character sketches of each one - the warts, literally, n all. A tour de force, reminiscent of George Mackay Brown's Hamnavoe Market characters, but with the hirpling rhythm of a wild reel.

The theme of farming life nicely balanced Niall Campbell's , who comes from a fishing family background so the rural theme continued- the copper of rusting fishing ropes like 'ampersands.'  But we also had poems inspired by Niall's sojourn in France where he spent several weeks on the Robert Louis Stevenson Writers' Fellowship and particularly evocative, a poem about the tepid water there in contrast to memories of cool water from Scottish taps. His  lyrical and sensuous poems have an elegance in their brevity and he has  a fine-tuned ear. A young poet starting his career, who will be someone to watch.

Aonghas MacNeacail in his 70th year, our leading Gaelic poet, also read in English and Scots. The trouble with Gaelic poems, he said, is they take so long, as you have to read the English translation too! This self-mocking sense of humour was evident in all his asides and also in his delightful poems. 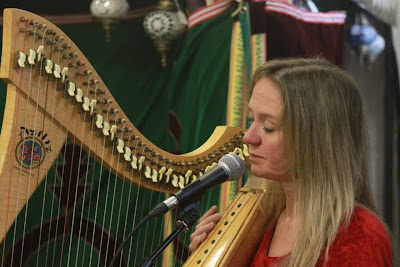 It was also clear why Patsy Seddon is considered one of our leading Celtic harpists and singers.  She certainly gave the whole event a special atmosphere and lift. And it was very illuminating  to learn about the difference between a clarsarch and a Celtic harp. (If you're interested, a clarsarch has metal strings and is played with the finger nails. The Celtic harp has gut strings. The one she played was the latter.)