Berlin Umbrella : how it happened. PART 1: the Poet's p.o.v.

As the launch of this Poetry/Sound collaboration 'aural walk' approaches, (June 3rd, 10th and 17th June, 2018 in Berlin (see previous post), here is my diary notes on our research and development during  2 weeks in July 2015:


A Sound Artist's work was completely new to me, so it was with great excitement that I accepted my friend Sonja Heyer's invitation to collaborate on a poetry/sound project.   Sonja's suggestion for the topic we would explore was Water. Wonderful! Already I could envisage imaginative possibilities.

Sonja has an archive of water sounds from different sources and has already devised many aural walks using text but she had never used poetry before.  Recently she had been invited to Taiwan to visit the city's water sources in the hills, make recordings and devise a water installation.  The experience was hugely exciting and I watched a vimeo she had made of the trip, the aural walk she had devised collaborating with Taiwanese performers.

Using transparent plastic umbrellas, the curved ones that form an enclosure around the user, a sound world is created with recordings played through tiny loudspeakers inside the umbrella - where the handle meets the spokes. Participants go on an aural walk, listening to the umbrella recordings on a self-directed route.

Although Sonja has used text inside her umbrellas before - most recently a quotation from Luther about death, (for his centenary year at Lutherstadt Wittenberg) she has never used poetry before.  So this was to be a new experience for her too.


So our subject was to be Berlin Water. More detail as to content could wait. First we were more concerned to establish the poetic form or approach that would work with Sonja's water sounds. I had already done some preparation by reading a few river or water-inspired collections  and  had brought along Alice Oswald's 'Dart' .  Sonja loved the flowing nature of this epic-length poem of mini-narrations with a variety of voices: the river itself, people who have river-related jobs, fishermen, poachers, the drowned, supernatural creatures etc.

But Sonja also liked the haiku I brought along, and the idea of  very small poems that could be read in any order. This was so that the participants could swop umbrellas mid-walk and so create different sequences, in a sense make their own poems. Of course, Sonja as a sound artiste was interested in effects achieved by playing around with different sonic patterns, vibrations, rhythms.  But how would it work for words and any linear thought? It seemed quite a challenge to my usual approach. But hey! No harm being shaken out of my comfort zone and I was excited to try a new way of thinking. For this to work, I felt, it meant a series of both haiku-like, imagistic poems, and a series of fragments developing links like rhyzomes.  Connected, then disconnected, reforming, looping, like memory, unrolling like film....already ideas beginning to rise.

So from the start, we had in mind small poems of intense images, like water drops, and other more flowing pieces of watery subject matter and how to achieve both was the challenge for me.

Right, so now we moved on to discuss the subject matter in more depth. What would we cover? The Spree, the river which flows through Berlin of course but what aspect and what other watery subjects?   River-related history?  Ecological aspects? The nature of water?

Googling Berlin +Water I  discovered the existence of an old Waterworks Museum, called Friedrichshagen (every other place or building is Friedrich-something in Berlin, after the Prussian leader)  by the Müggelsee - an inland lake and part of the river Spree.  It was a very hot day - and the thought of trip out of the sultry city to the countryside, a bit of research followed by a boat trip round the lake seemed ideal.  We took the S-Bahn down - about half an hour, then the bus to the Waterworks.


It was cool and dark inside the Museum luckily.The curators were delighted to see us as they had  no other visitors, and were happy to turn on the asthmatic Old Wheezer pump for us (usually only switched on at a scheduled time which we had missed.) It was obvious how it got its name.  Sonja recorded it and it will surely go in the finished collaboration.  Perfect. Already ideas simmering as to how this might be used. 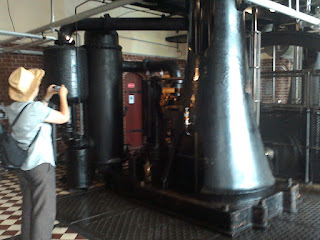 The Museum was a fascinating record of all the issues of Berlin's water and sewage systems- from the early days, with hollowed out oaks pipes carrying water to old-fashioned street water pumps,

and documentation of the horrific outbreaks of typhoid and cholera epidemics until right up until the discovery  in the 19th century of the cause of these diseases by an English man Jon Snow -it was water pumps infected by sewage -and this knowledge spread to the rest of Europe. Hence in the 1870's an English engineer, Henry Gill was invited to sort out Berlin's water problems. Who would have thought this could be so fascinating!  And it was a German/British collaboration! Just like Sonja's and mine. Friedrichshagen was the last of the three Berlin waterworks Gill built - and what a palace it is, almost a Cathedral to Health! No expense spared.

At the same time, James Hobrecht, of Prussian birth, sorted out the sewage system with his Radial System of sewage pumping stations.  Co-incidentally, one of the former Radial Systems (V), is now a cutting edge arts centre which we  attended during a festival of acoustic music.

But to go back to our day out at Friedrichshagen, in the end we missed the boat trip round the Müggelsee but a different trip on offer seemed more enticing - the ferry back to the city. Much nicer than slogging back to the S-Bahn and a chance for me to observe watery images and sounds of all types - the light on water, on boats, movement of waves, the throb of the engine. I was taken by the Huckleberry Finn type rafts with sheds on top drifting by  though sadly these never ended up in the poems. 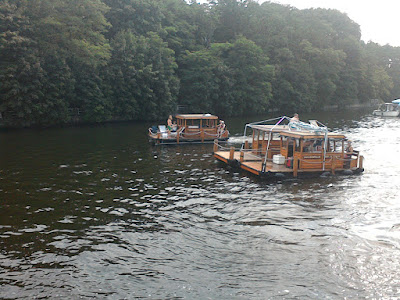 However the party boats did.  One of these became stuck in front of our ferry and it took some time for the rather drunk but hugely apologetic crew to disentangle themselves and head out of the way. Plaintive cries of  'Entschuldigung… Entschuldigung…' ('Sorry...Sorry...') from them faded as our ferry chugged on. 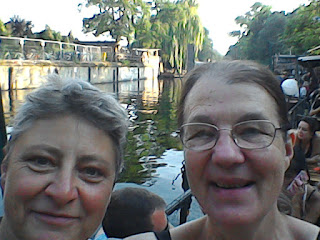 As you can see from the photo above, we were mightily pleased with our first day's research, coupled with a wonderful excuse for a trip on a river boat, a relaxing way to get a bit of a sun tan, and as we decided to sit in silence on the way back, to reflect and  to meditate  over ideas for possible poems in my case, and possible sounds for Sonja, followed by, what else, a river-bank (or rather an inlet off the Spree) open-air restaurant near Treptow.  Willows drooped in the water. It could have been Twickenham or Marlow, except for the loud music booming from a restaurant across the narrow inlet.

Part 2 follows in next Blog.

Posted by Stephanie Green at 10:22