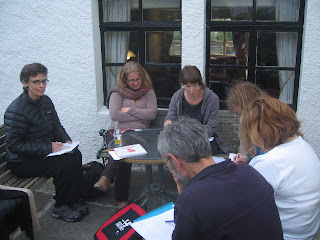 This year, the highlight workshop was the communal Renga which we started at Busta House Hotel - a 16th c laird's house with a sad haunted past and now swish present. But the Renga is still in progress, via email, so I'll blog about that when it's finished.

Thanks to Creative Scotland (as the revamped Scottish Arts Council is called) who gave me another grant, the second one running, to attend Makkin wi Wirds (part of Fiddle Frenzy) poetry writing course, I am now amassing enough poems for a pamphlet...and building on my first collection.

But poetry workshops are not the only draw to Fiddle Frenzy (see previous two years' blogs)- there's the fiddle concerts every night with Aly Bain and Phil Cunningham returning as the mega stars. Trips round Shetland, some needed fresh air and more experiences which might result in poems - this year to Ollaberry and an exhibition inspired by 'Extreme Wave Theory' by 'foul weather artist' Janette Kerr in Bonhoga art gallery in Weisdale Mill - dramatic evocations of storms in black and white based on real experiences. It seems the artist has sailed in high seas with fishermen - rather like Turner who had himself tied to a mast to experience a storm. The charcoal sketch books interested me most, but then I always like artists' sketch books rather than finished works.
See http://visit.shetland.org/extreme-wave-theory-exhibition-at-bonhoga

A trip to the Cunningsburgh agricultural shows meant thousands of photos of Shetland ponies for me. I'll just post one to give you an idea of their size. 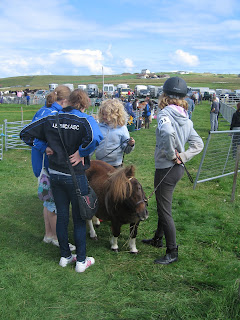 If you like, there is the opportunity to attend taster workshops in the other subjects on offer: Shetland knitting or painting and sketching,apart from fiddling at all levels and guitar, of course. 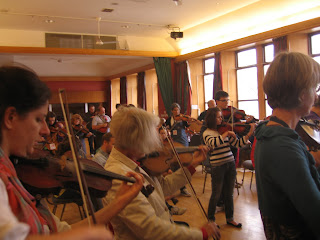 And it's not all work. Here's one of the ceildhes: note walking boots! 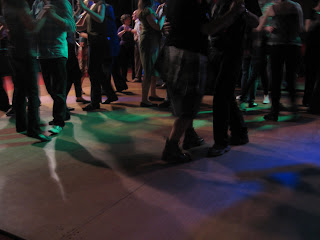 You'd think I might be bored by Shetland on my third visit but no. I can see why some of the Frenzied (as in those on the Fiddle course) return year after year - some for 7 of the 8 years it's been running. There is still so much to discover on Shetland, Jen's workshops continue to be special, but this year there was the extra bonus of seeing familiar faces and now getting to know Shetland through the eyes of the locals, visiting some in their homes.

And an unexpected surprise: the apparition of a creature from another world in Aith harbour. S, fellow poet and I were chatting, getting some fresh air not in the least looking for it. A dog otter I'd say, (going by the stuffed one in Hay Dock museum)- big as a small dog- maybe four foot including the tail. His large head (almost as big as a seal's)surfaced and he regarded us curiously for several minutes - not long enough for me to get my camera out) before diving with a flourish, then he was gone. We stared all around for some time, knowing they can swim some way before popping up again, but no, that had been our moment. A gift from the pagan gods - or maybe a pagan god himself. And my second otter sighting this trip.

For my blog on last year's Makkin course, see http://stephaniegreensblog.blogspot.com/2010_09_01_archive.html
Posted by Stephanie Green at 18:45