After St Kilda, I arrived in Shetland a week before Makkin wi Wirds, Jen Hadfield's poetry writing course,  to explore areas only touched on before on previous visits. After a helpful fine tuning of my MS in progress by Jen, in a pre-course mentoring session, I drove up to Unst, via road and island-hopping by two ferries, for a week's self-imposed writer's retreat, including writing up notes for poems, and maybe, new ones inspired by Unst: another Ultima Thule. It seems I can't get enough of them.

Unst is the most northerly of the inhabited islands of the UK - though the most northerly land is not Mukkle Flugga (Big Rock) and its lighthouse (built by one of RL Stevenson's relatives) as many people think, but a rock, a bit further on, called Out Stack. My aim was to take a boat trip round the two of them but on arrival in Shetland the fog descended. All I saw of the drive up and Unst for three days was fog. So I haunted the Heritage Museum and Boat Haven museum, both fascinating. 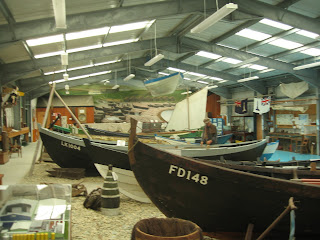 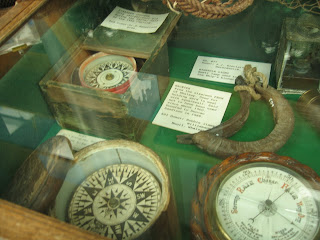 I also went swimming in the splendid Leisure Centre and warmed up with hot chocolate in the Chocolate Experience cafe which was packed. Every other tourist having had the same idea as me. Life in Unst is not so Ultima Thule as one might suppose. 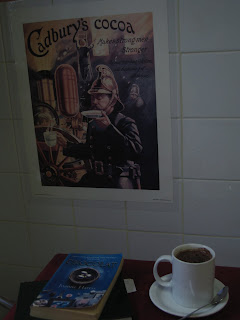 Yes, that is a copy of Joanne Harris' 'Chocolat'. What luck for Joanne Harris as a marketing ploy. Perhaps I should give up writing poetry - or maybe write poetry about chocolate.

On the Thursday, a foggy start but there were rumours it might lift and so I drove out to the Herma Ness Bird Reserve and former lighthouse shore station for Mukkle Flugga, now containing a museum,(including delightful bird sketches). Below this is the wee harbour where the boat, if it went, would set off from.

The first boat trip was cancelled but I put my name down for a second mid-morning. By then the harbour was visible but further out to sea down the sea-loch all was fog. 'We'll set off,' said the skipper, 'and see what happens by the headland. If it's still foggy, we'll turn back and you have your money back. How's that?'

This is my contribution to a communal Renga which I was later to write on Jen's course. More of that later. The surprise blue was the miracle that occurred on this boat trip. By the time we reached the headland of Saxa Vord, its radar were visible (the former RAF station)and we were out in blue, blue seas and clear skies: Lighthouse shining in the sun. Thousands of comical puffins, dipping, shaking their heads, floundered on the surface trying to get airborne (their bones, like guillemots and other divers are heavier than other sea-birds, so that they can dive) and then up into the air in great swirls along the cliffs and down into the sea again. We were lucky. The puffins have usually left by end of July- and we were in the last week of July. 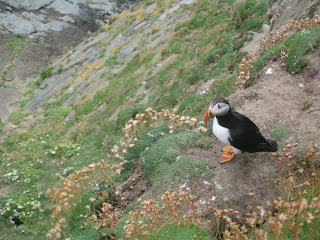 Sad to learn (at a visit to the bird reserve on Sumburgh Head before setting off for Unst) that they did not breed this year - due to a shortage of sand-eels in April and May from the too cold sea then. It is thought that the changing climate due to global warming may be the cause. Now in July there were enough sand-eels for the adults. Let's hope things improve next year or puffins will be in danger of becoming extinct.

At Herma Ness the convoluted cliffs are far more interesting viewed from the sea and one can see caves not visible from above if walking along the top and this way we avoided being attacked on the boggy moors of Herma Ness by the nesting bonxies, (great skuas) or maybe the trolls, lying in wait under bridges, like in the Billy Goat Gruff tale. 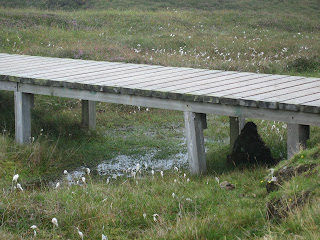 Moors of Herma Ness Bird Reserve: is that a troll?

But the bonxies, brown menaces, can be seen hunting in pairs, one harrying and driving a beautiful gannet into the path of a waiting bonxie. Bonxies are known to drag gannets by their wing tips down into the sea to drown them. I am beginning to hate them.

Thousands and thousands of gannets with their six-foot wing span, rather like swans or geese, but with yellow necks, and black tips to their wings, glide above. It is a much better view of the bird life than I had on my St Kildan trip, to be honest. There I let the two teenage lads monopolize the binoculars, and I didn't have a pair myself. Also, I realize, the mast and sail, obscured some of our view of the birds. But I wouldn't have missed that trip for the world (q.v. earlier blog). 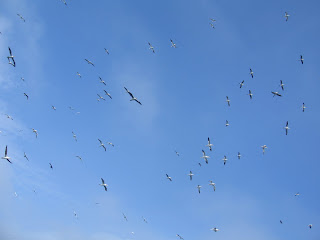 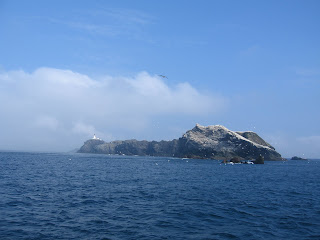 The wind was southerly. The next day a northerly was due, the skipper said, and it would be too dangerous to round Mukkle Flugga and Out Stack with the great swells that would occur. That must be quite something. They were pretty rough on our trip as we headed north of MF and round Out Stack. But we did it!

After the trip the boatmen invited us to a hut on shore for a cup of tea - most welcome. But when most of the day-trippers had left, the boatmen opened a cupboard in a corner for their 'stress relief'. No prizes for guessing what the cupboard contained. 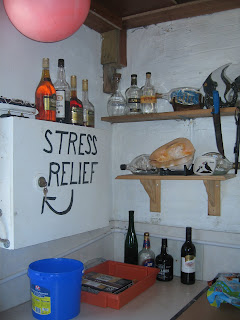 Another must I was determined to see was an otter. But these are elusive beasts. On previous visits to Shetland, I'd had no luck. On Unst, the remote landscape and continual news of sightings, must surely be the place I would have an encounter. One of the boatmen on the MF trip recommended a certain bay. There was a pool just inland from the shore. I'd been told the otters need to rinse the salt out of their fur and come ashore to bathe in fresh water every evening. I chose early evening and sat for an hour or so, keeping still, writing with occasional glances up. No luck.

'Oh, yes' said a girl I chatted to on another beach as she walked her dog,' I see them almost every evening about 5pm crossing the road here.' Again, nothing.

Finally whilst chatting to the lady (dressed up as a Viking matron)who was showing me round the replica 9th c Viking ship, I asked her advice. I had heard that the loch where the boat is, was a good spot. 'Yes,' she said and pointed out at the loch:'Look'.
And there they were, two bodies, entwining with eachother, over and under, one smaller than the other. The males can attack the young, the woman said knowledgeably, so it had to be mother and baby. One swam to the shore and I even managed a photo - though only of the adult - not a high standard of photography. Still, a memory for me. 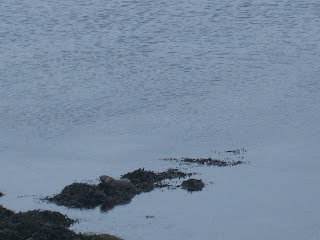 Then down to Lerwick for the start of the Makkin/Fiddle Frenzy course.
Posted by Stephanie Green at 20:45